Rebecca is a 2x confirmed speaker for NFT.NYC and is spoke at NFT BZL 2021 discussing NFTs and their holographic possibilities with support from Spectre Holograms, her sponsor for the event. Her NFTs have shown at the Miami Bitcoin Conference, The Blockchain Center NY, Soho House Hong Kong, and Stratosphere Beijing among others, and is on curatorial teams for MakersPlace, KnownOrigin, and SearchLight that brought irl and metaverse exhibitions to multiple venues in NY, Miami, Decentraland, and CryptoVoxels. She is a freelance journalist with NFTsWTF and have conducted interviews with gallerists from Superchief Gallery NYC and popular 10k gen art projects in the space. As a musee.art landowner, Rebecca is developing the metaverse's first NFT Hologram Museum.

Rebecca explores the capabilities of her work as NFT holograms using pepper's ghost, cylinders, inverted pyramids, vapor, and micro projections on personal devices. She is testing live feed holographic conversations held between countries, and is developing theories around a new digital user experience through holograms that allows audiences to engage with and virtually experience her art while occupying a physical space. Her entre into NFTs includes unique, single edition digital works inspired by her digital collages and paintings. She intends to apply these innovative findings to future exhibitions of her work as well as to help advance digital economies and sales in the art field, and how we as a society communicate en masse.

She led creative projects at The Walt Disney Co. for 18 years specializing in face and body painting prior to Covid-19. During her tenure there, she opened multiple new locations across property and worked with partners from Lightstorm Entertainment to develop the Colors of Mo'ara, and Lucasfilm for their Star Wars Weekends promo campaigns. For 4 of those 18 years she was flown to Rabat, Morocco to provide artistic entertainment to the Royal Family of Morocco to celebrate the offical birthday parties of HRH Princess Lalla Khadija and HRM Crown Prince Moulay Hassan at the Royal Residence and Palace.

Her body of wearable art is a hybrid of small sculpture and jewelry cast in precious metals using the lost wax casting process. Rose had bronze works included at The Andy Warhol Museum and was an artist for the interactive digital exhibition component during the 2017 Whitney Biennial held at the Whitney Museum of American Art in New York. She has shown during Beijing Design Week, Shanghai Design Week, and Art Basel Miami Beach. Her work has been featured on the pages of British Vogue and Conde Nast Traveller, and as a member of Mensa was featured in a cover story for their monthly magazine. She has been filmed for documentaries by PBS Artisodes and Art Attacks, featured in Yo-Yo Ma's Bach Cello Suite and KTLA’s Good Day LA, and is collected by notable figures such as Andrew Lincoln from AMC’s The Walking Dead, Russell Brand, Slash, and Kat Von D.

Her art is recognized in academic communities as the subject of dissertations and participated in conferences and panels in conjunction with nationally acclaimed galleries. She is well versed in the subjects of wearables, art jewelry, and holograms having coined the Bridgism movement to describe wearable art and sculpture crossing over into realms of digital fashion and sculpture, creating a bridge between the two art forms.

Rebecca's sculpture was awarded grants co-sponsored by The Robert Rauschenberg Foundation, The Andy Warhol Foundation, The Willem de Kooning Foundation, The Joan Mitchell Foundation, The Andrew Mellon Foundation, The Ford Foundation, Bloomberg Philanthropic, Cerf+, The Halstead Grant, and the Hilary Teachout Grant granted by Terry Teachout, drama critic for the Wall Street Journal. Her sculpture has also garnered prominent scholarships by the Society of North American Goldsmiths, Crafthaus, and two full tuition scholarships from Northern Arizona University. She has given artist talks at NFT.NYC, OxBow/SAIC, The Craft in America Center in Beverly Hills and at think tanks in conjunction with The American Craft Council. She was a fall resident at OxBow, one of the country’s most prestigious and longest established art institutions, and was invited to create 4 new works to commemorate the 50th Anniversary of the Apollo 11 Moon Landing for the official gala held at the Kennedy Space Center. She is a spring 2022 artist in residence at the Joan Mitchell Center in New Orleans.

Rebecca has a passion for volunteering and in 2016 was given the Governor's Medal of Unity for her volunteer work as a Red Cross first responder following the Pulse tragedy. Rose currently works in her home studio in Florida. 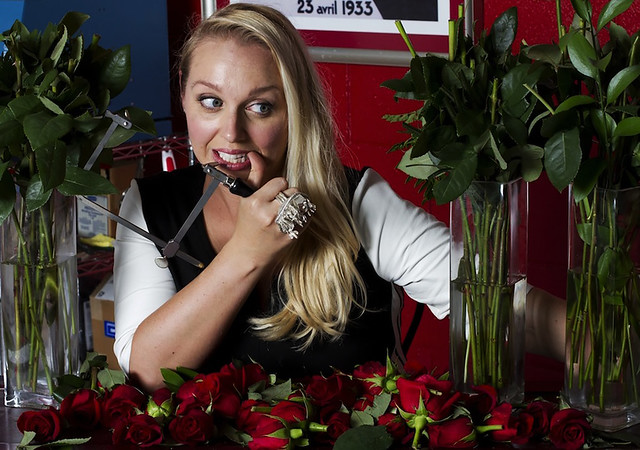